A fleet of 32 boats holding more than 100 crew members from 13 nationalities, plus 2 dogs, have embarked on a three-year round-theworld adventure this October. Organised by blue water sailing group Grand Large Yachting and famous sailor Jimmy Cornell – initiator of the event – the Grand Large Yachting World Odyssey 500 commemorates the 500th anniversary of the first round-the-world voyage, started by Ferdinand Magellan and achieved by his partner Juan Sebastian Elcano.

It is this landmark anniversary that inspired Grand Large Yachting to organise its first ever sailing round the world event, and give blue water sailing enthusiasts the opportunity to write their own history. The project has attracted participants from all over the world, including Canada, the USA, Brazil and Australia as well as several European countries. To allow sailors of different levels of experience to participate, Jimmy and the Grand Large Yachting team have carefully designed the itinerary with 2 routes : A tropical route that follows the traditional trade/ easterly winds through the Panama canal, and a southern route truer to the original voyage via Patagonia and strait of Magellan. These two routes will meet in Tahiti, from where the whole fleet will sail together for the rest of the rally.

“Our mission as a company is to enable everyone, experienced sailor or not, to realise their dream of blue water sailing while respecting the oceans and providing them with security, serenity and support at every stage of the project. We are thrilled to be able to make this real by giving our sailors the opportunity to travel around the globe with the support of a group which provides not just a boat, but also the training and services to help ensure a safe and memorable experience. What makes this really special is that, as part of the official events commemorating the 500th anniversary of the first circumnavigation, we are connecting like-minded people who will share together the experience of a lifetime. We cannot wait to embark on this fantastic journey with everyone involved,” says Xavier Desmarest, co-founder of Grand Large Yachting.

True to Grand Large Yachting’s ethos, the duration of the trip over 3 years will allow for a leisurely pace conducive to discovering the sites and local cultures during multiple stop-overs in some of the world’s most beautiful places.

On September 27th, 15 of the boats have set sail together from La Grande Motte to Sevilla, city from which Magellan’s fleet departed in 1519. For the crews of the Grand Large Yachting World Odyssey, the week of sightseeing and festivities have ended with a very special ceremony at the Comandancia Naval of Seville, where Jimmy Cornell received the Naval Merit Cross – highest civilian distinction – awarded by the Spanish Ministry of Defence in recognition for his support in raising awareness of the great maritime achievement that was the 1st circumnavigation.

Before leaving Sevilla, crew members were also invited to attend a symbolic candle lighting ceremony at the church of Santa Ana, where Magellan and his crew gathered 500 years before them to be blessed before their arduous voyage. The fleet, that counts a Garcia Exploration 45 and a 52, has set sail early Sunday 24th of October to Santa Cruz, Tenerife (Canarias) for the official rally departure that will take place on the 21st November. 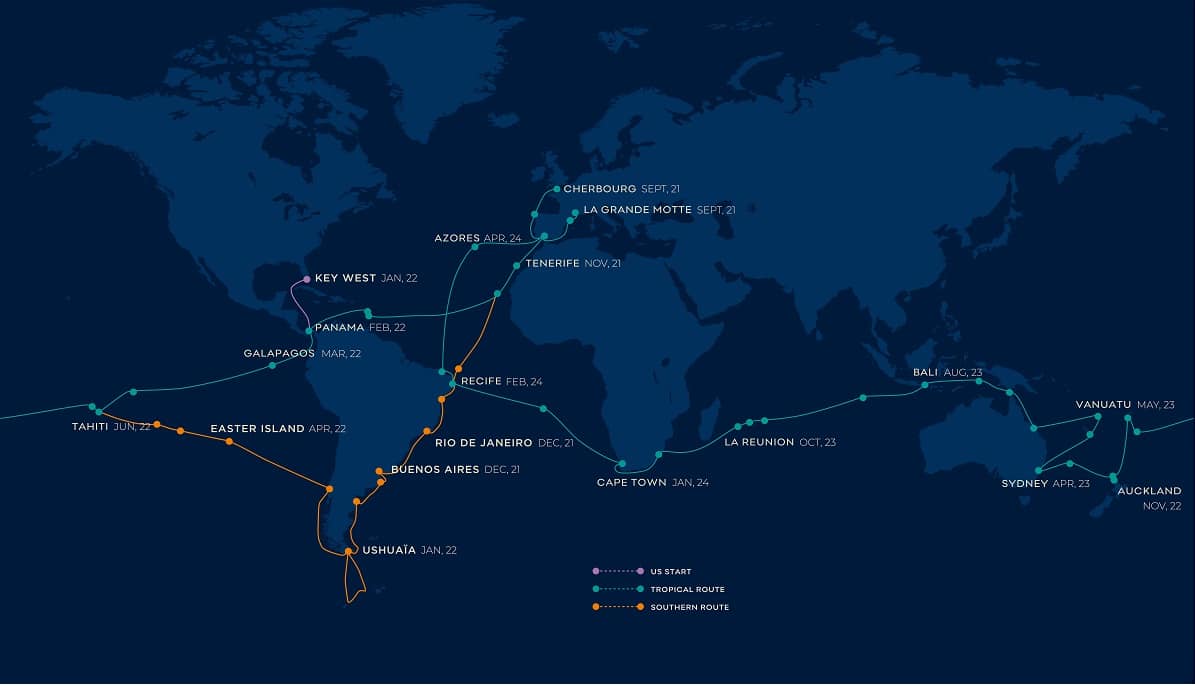