Eight years around the world – the dream of a lifetime

Aquarius is the first Garcia Exploration 52, and that’s not the least of her uniqueness. Halfway around the world, Hervé Couturier has revealed all the particularities of his voyage. Notably, he’ll be crossing the wake of Dumont d’Urville, the famous 19th century French explorer of the Antarctic coastline, and originating, like the Garcia family, from the Normandy town of Condé-sur-Noireau! But dropping absolutely everything and setting off wasn’t the right philosophy for this skipper. On the contrary, he has managed to organise himself to reconcile a hectic professional life, a rich family life, and numerous friends, and therefore is blue water cruising in stages. It’s an approach that many sailors are keen to adopt and which here has been particularly well organised, enabling a tailor-made round the world voyage, spread over eight years! Here, he shares a few explanations.

How did you get into sailing?

“I think I was about 13 or 14, and friends of my parents took me to l’Aber Wrac’h in Brittany, to do a dinghy-sailing course, on a 420, at the UCPA – a French non-profit outdoor sports organisation. Even though I was a long-time sufferer of seasickness, and sometimes still suffer even now, I was immediately and permanently captivated. Over time, I did a series of UCPA training courses, up to skipper level, which, as an adult, enabled me to regularly charter boats all over the world.”

But how do you go from doing two-week charters once a year to a circumnavigation project?

“It’s first of all the story of a revelation. It was almost fifty years ago, but the memory is perfectly intact in my mind. In 1972 or 73, still a young teenager, I attended a talk given by Gérard Janichon, from the sailing boat Damien. I was absolutely fascinated by his story. The images of Antarctica and the ascent of the Amazon they made with Jérôme Poncet left a lifelong impression on me. I remember coming out of that room in Royan and saying to myself, “Someday, I’m going to do that!” Obviously, the next thing was that I devoured their books. And the books of two other sailors were also to leave their mark on me: those of Bernard Moitessier and Ernest Shackleton. The famous French singer/sailor, Antoine completed the last part of my dream, convincing me to leave. Not that I needed much convincing. But the inspiration for my trip is certainly a mix of Damien and Moitessier”

The years were passing, but at what point did you say “Right, I’m going”?

“In 2012, at 54 years of age, I told myself that I shouldn’t postpone my dream project indefinitely. It was to come true in two stages, in fact. Firstly, in 2012, I took the opportunity of professional changes, to take two months holiday, making my first Atlantic crossing, on an Alliage 44. This boatbuilder has since disappeared. And already, I was organising this first voyage with regular rotations of friends as crew members, all of whom had professional activities that precluded them from being available for more than one or two weeks at a time. It was when I returned in 2013 that I launched the Aquarius project, a much longer trip, but with the same idea of alternating periods on board and periods ashore. For me “retirement” is a dirty word, and I can’t imagine stopping working at all. But leaving a company that has 6,000 employees in 2016 to become an independent consultant gave me much more freedom. So I began my search for the ideal boat, with my specifications laid out in a PowerPoint file, which must have caused a few laughs at the shipyards I consulted. But I had a very good feeling with the Garcia team and their architect, Olivier Racoupeau. The genesis of this first Exploration 52, from the design to the launch, and right through every construction phase, including the metalwork, was carried out with impressive know-how, and became an extremely interesting and enjoyable period”. 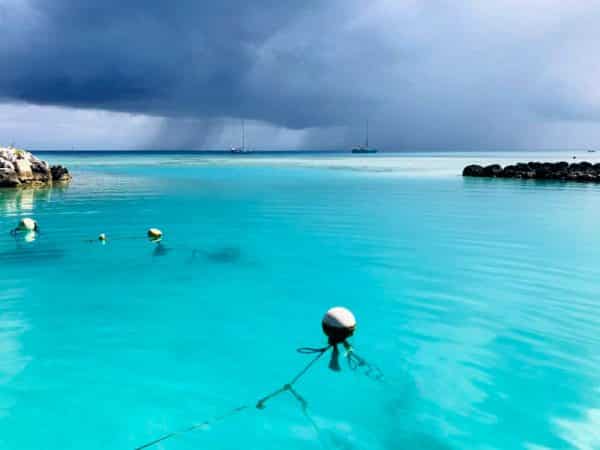 The boat was launched in early 2016, so what’s the program?

“The plan was to sail around the world as slowly and with as many crew members as possible (laughs)! More seriously, the programme is being spread over eight years, four for the outward journey and four for the return journey, which we’re going to start in December 2020. The boat is currently in Tahiti and over a hundred crew have already sailed aboard her! It’s quite exceptional, as on most of the boats we’ve come across, it’s couples who are usually sailing just the two of them on a permanent basis. One thing though, in fact the only slight disappointment of this magnificent voyage is that we don’t have very close relations with other sailors, as our rhythm is really quite particular. But that’s more than compensated for by what we experience along the way. We also have a very clear modus operandi with our crew. Everything related to the boat is for me, everything related to restaurants, shore excursions and so on, is the responsibility of the crew. It’s as if Ségolène (my wife) and I have been invited on our own boat. Well, economically I’m not sure I’ll be a winner (laughs) but the transparency of the arrangement is very pleasant, and given the number of crew members who have come aboard Aquarius since the start, most of whom are coming back or want to come back, it seems to suit everyone”.

“After spending the summer in Brittany getting to know the boat, and a stopover in La Rochelle where we were very proud to have Aquarius on display at the boat show, we headed south to carry out two humanitarian missions in Senegal, in the Sine Saloum region, for the Voiles sans Frontières and Pompiers Entraide Internationale organisations. I still don’t quite understand how we were able to get all the equipment to be delivered onto Aquarius, but somehow we managed! And it was really extraordinary to start our trip with these incredible moments, anchored in the mangroves, painting the dispensary, installing the equipment, redoing the plans for the school, and much more besides. Then, in 2017 we crossed the Atlantic, from Cape Verde to Barbados and enjoyed the West Indies. There were up to 11 of us on board to celebrate Christmas and then the New Year for 2018! Even the saloon had been requisitioned as a berth, but what memories, these moments with the family. Next, we sailed down to Cartagena, in Colombia, and then the San Blas islands, before transiting the Panama Canal and then on to the Galapagos. Several crews took turns there during our three-month stopover, thus preventing the sea lions from taking Aquarius over as their home. In the event, they didn’t venture any further than the sugarscoops, which they did seem to find very comfortable. For the Pacific crossing to the Marquesas Islands, I entrusted the boat to four friends and for the past year we have been on our third trip to French Polynesia. I even allowed myself a little extravagance last July. I was in Las Vegas for work, so there was “only” 8 hours flying time to Papeete, so I offered myself a week’s solo sailing around Tahiti!” 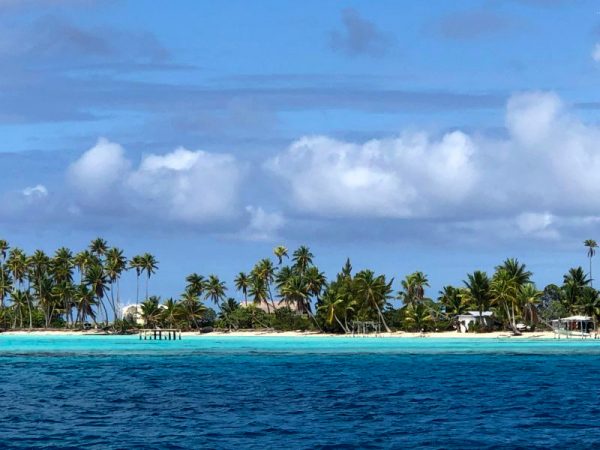 What route have you chosen for the return trip then?

“As Moitessier advocated, we’ll be taking the ‘logical’ route! That is, Aquarius will return to Europe via Cape Horn. But before that I absolutely want to go for a trip to Antarctica, and I’ve set my sights on the Ukrainian research station at Vernadsky, located at 65°S in the Antarctic Peninsula, which is opposite Cape Horn. It’s said to have the southernmost bar in the world, even though it only opens when someone shows up, and that’s not every day! It will have taken around two months at sea from Tahiti, in conditions which are bound to be bad at some point in these latitudes. But Aquarius has been designed for that, and I received valuable advice from the great Jean-Luc Van den Heede at the Grand Large Yachting group’s owners’ party in Paris last December, so I’m confident. It’s a question of planning in advance for the installation of a jury rig, so as to anticipate a possible dismasting, major damage which, according to VDH, can occur at any time and on board any sailing boat on the Southern Ocean. Suffice to say that I listened to him attentively! We’ll then sail back to Ushuaia (still with our original rig I hope!), where I will leave Aquarius for a season. Wintering the boat and having it serviced remotely is never easy, and it will still be the case there, but everything always gets done in the end… thank you Grand Large Services! Sailing in the wake of Shackleton, Damien and Bernard Moitessier is well-deserved anyway, and living my childhood dream, or rather the dream of a lifetime, is priceless!” 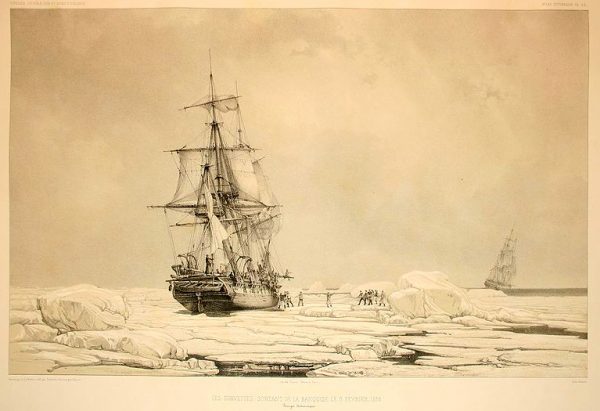 A corvette of the French explorer Jules Dumont d’Urville near Antarctic in 1838.

Also, by charting this course from Oceania to Antarctica, Hervé and Ségolène are partly following the route of the Norman explorer Jules Dumont d’Urville. During his third voyage around the world (1837-1840), he anchored successively in Tahiti, Tonga and Samoa, New Zealand, Tasmania… and sought to reach the South Pole, just to honour the mission entrusted to him by King Louis-Philippe! It wasn’t until January 1840 that two of the ships of his expedition, the Astrolabe and the Zélée, reached a land made almost inaccessible by ice: it was in fact a continent, Antarctica, the mythical “Terra Australis Incognita”. This same Southern Continent that the English captain James Cook had approached very closely without seeing, in 1773, reaching the insane latitude of 71°S, and which was in fact discovered in 1819 by William Smith, also an Englishman. Never mind: Dumont d’Urville named this desolate territory Terre Adélie, in homage to his wife Adèle, and which is today a district in its own right of the French Southern and Antarctic Territories (TAAF), which occupies the base named after Dumont d’Urville, of course. And the most incredible thing is that this intrepid sailor was born in Condé-sur-Noireau, in Normandy, in the same place as Hervé and Ségolène’s boat, for it was in Condé that the Garcia brothers founded the shipyard that bears their name in 1973, and where the metalworkers of Garcia Yachts continue today to build the shaped aluminium hulls of the Garcia Exploration range. Including Aquarius.

“I find this coincidence incredible!” concludes Hervé. “It remains to be seen whether, like Dumont d’Urville, we’ll complete three circumnavigations, but given the pace we’re going at, it seems much more uncertain…” (laughs).

100: (estimated) the number of crewmembers who’ve sailed on Aquarius over five years.

11: number of people on board in the West Indies for the 2017 Christmas festivities.

30: in kilograms, the weight of the 2-metre Marlin caught off the coast of Colombia.

19 and 13: in days at sea, respectively the times of crossing the Pacific (Galapagos — Marquesas) and the Atlantic (Cape Verde — Barbados).