This chronicle is the first of six written by British sailor and author Pete Goss.

Find the page to all chronicles by clicking here: Long time cruising, a voyage of many highlights

Discover more about Pete Goss by visiting his official website.

Tracey and I have many wonderful memories of our time on ‘Pearl of Penzance’ including the exhilaration of arriving in Antigua after an Atlantic crossing. It was late afternoon and the softening sun gifted a stunning rainbow to mirror Traceys exuberant smile. That night we sat in the cockpit, wafted by an exotic tropical breeze and shared a bottle of bubbly that the kids had given us to celebrate a special moment.
It had been a voyage of many highlights during which we got to know our wonderful boat, a Garcia 45 Exploration and started to get to grips with our new life on the water. There were some tears at the start as we bashed our way down the English Channel in December. We have a red card system whereby either of us can stop the show, no questions asked, on as little as intuition. In this instance Tracey decided to keep hers in her back pocket for the other option was to be marina bound in a deepening winter for up to three weeks. Motivated by a weather window across the Bay of Biscay we went for it. We would suffer short term medicine for long term gain.
The first night was grim but as a team we play to our strengths and so I was able to cover the worst of it. In the early hours of a dark, cold and turbulent night we rounded the NW tip of France and offered our stern to the wind. As we surged into our new life a fading Ushant and her continent seemed to flash goodbye. A hearty breakfast put the night behind us as a clear sky and rising sun coaxed the crisp new spinnaker out of its bag. It was such a thrill and set the tone for the next two and a half years. We had made the right decision.
It’s a misnomer to say that our adventure began at Ushant for the truth is that it started a couple of years prior to stepping onto ‘Pearl’ for the first time. On reflection it seems that there are three parts to an adventure; anticipation, participation and conclusion. The first two are wonderful for they offer complete immersion in a new, exciting and life affirming world. The last can be rewarding but it does have teeth if you haven’t, from the outset, considered the full life cycle of your adventure. Ending on good terms with an easy sale at a good price can be the icing on the cake for it liberates the next chapter.

The success of all three sit firmly on the foundation of boat choice so don’t be seduced by romance, marketing or a quick deal. Strip your notion of cruising down to its constituent parts and really think about what you want to achieve. Make sure that both of you get what you need for needs differ and we have seen partners ground down by a one sided choice. Take you time, go for walks, share a bottle of wine, read, chat to others, watch YouTube go on a charter holiday, whatever it takes to be brutally honest with both yourself and each other. This clarity of vision will prompt the right boat and from then on plans can evolve whereas the boat can’t. Get it right.
In our case we were lucky to have my past experience as a competitive ocean sailor who has built many boats. This in-depth knowledge enabled us to see through much of the smoke and mirrors thrown up by glossy marketing. Your boat must look good to your eye but the truth is that it is a piece of engineering. A machine that you live within and maintain as you undertake the job of sailing it to your dream destinations. Most boats are designed for weekend sailing with piles of bunks, no storage, undersize tankage, light structure and the need to coexist with marina’s. We wanted a well engineered vessel that could look after us, be reliable, ride out a storm and be a comfortable and welcoming home.

“Do we serve the boats needs or does the boat serve ours?”

I guess, for us, it boiled down to a subtle tipping point. Do we serve the boats needs or does the boat serve ours? This might sound an odd statement but we have come across so many cruisers who spend all their time, resource and emotion keeping their boat going. Many of them, interestingly, are new boats which haven’t been built to the standard required of live-aboard quality and equipment choice. A small repair in Europe can mean two or three weeks of expensive and screaming frustration in foreign ports. Parts, having been held up in customs, often don’t fit due to a simple modification. It’s devastating to see dreams reduced to such a degree.
We had been unable to find the right fit for our needs and resigned ourselves to the slog of building our own boat until I stumbled across the Garcia 45 Exploration. I was delayed in Singapore and on treating myself to a Yachting World came across her launch. I was riveted and called Tracey in my excitement to say that I had found the boat of our dreams. It was two exciting years later that we walked down the pontoon to our new life and didn’t she look wonderful. All those years of building a career, raising a family and being sensible was washed away. This was our time, we had given ourselves permission to do what many said was mad. Standing on that pontoon saying hello to ‘Pearl’ put the cold and timid nay sayers in their rightful place. We were like kids again and remained so for the next two and half years, particularly as we were mature enough to enjoy a sundowner! 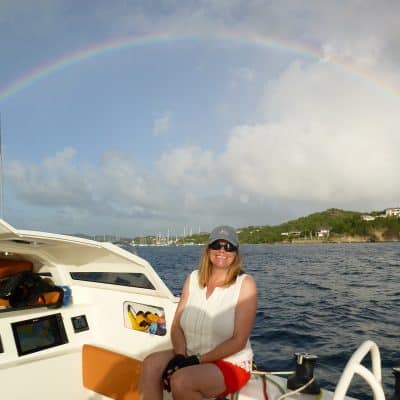 A challenge to oneself

Tracey was the brave one, she had only completed two night sails up to that point so hers was the bigger leap. In many ways we were quite different in that I enjoy the journey but she enjoys the destination. The Atlantic wasn’t something that she was looking forward too. It was undoubtedly a challenge she would love to have under her belt but the draw was exploring the other side. Wildlife, new friends and foreign lands beckoned. With the kids leaving home she felt she had freed up some band width that could, indeed should, be filled with a life affirming challenge. A new perspective perhaps.
I had never cruised and had a niggle in the back of my mind that it wouldn’t quite be enough for me. Our Atlantic crossing was amazing for Tracey blossomed as we settled into life at sea. For a first timer it takes a while to forget about the destination and live for the day. Life is now and living in the moment is a wonderful state of mind. If there was a mile stone for Tracey it was being joined by a couple of inquisitive Minke Whale mid Atlantic. Charles and Camilla, the ‘Whaleses’, stayed with us for three days, at times only feet from the boat as they surfed along beside us.
My concerns on arriving in Antigua were misplaced, this new dimension to sailing completely absorbed me. We had read that long term cruising is twenty percent sailing and eighty percent at anchor as you explore. Two and half years later we would agree so if sailing isn’t quite your thing see it as a facilitator. Something that offers you a comfortable home that has a millionaires view. In fact many millionaires views for yours changes while those mansions dotted along the coastline are destined to sulk, imprisoned by their their manicured lawns, as you sail off into the sunset.

Over time, empathy and patient coaching as opposed to criticism closed the chasm between us in terms of sailing knowledge. We found, like a well oiled machine, that we could undertake complex manoeuvres in companionable silence. Tracey came to love sailing, the oceans lost the fear of the unknown and became a place that nurtured her soul. Night watches will never be her favourite but lost their intimidation, our lives became at one with the seasons as we followed the sun in its annual cycle. Deadlines atrophied out of our lives as time took on a new meaning. The slower we went the richer the experience as flexibility embraced impromptu opportunities. An eagles nest, a perfect reef, meeting new people or deciding that a place had such beauty that we would simply be.
One of our goals was to meet new friends and so we were delighted to discover that we had joined a wonderfully generous community. We made more lifelong friends, of all ages and nationalities, in two and half years of cruising than the past ten years ashore. Everyone looks out for each other so you are never on your own or stuck without a smiling solution. The common practice is to share sundowners made companionable through common experience and of course this opens up what are often fascinating back stories. Anyone, by definition, who chooses to cruise will have bright eyed and interesting enthusiasm. In fact this is one of the main things that we miss as we prepare to build our next boat to explore the European coast, rivers and canals.

Long time cruising, a voyage of many highlights